IMPORTANT:
If you want to use information of this site,
please use a link to my page. In that way the information will be the most up-to-date!
It is allowed to use / copy the kanji and their translations in this article (only of this article please)
Please also read  “About”

“Before you clean the dust in a room, you throw water on the floor.
Before throwing water on the sharpening stone clean your mind”

(A message/advice from Mr.Sakamoto to the people
who are sharpening and using his nagura.
– Quote during Florin’s visit to Mr. Sakamoto – see further)

Classification of Jun Mikawa white Nagura (From shallowest to deepest layer)
(From the book「刃物の見方」”How to view knives” written by ‘Mr. Kōsuke Iwasaki’)

In the Mikawa region, Aichi prefecture (Aichi-ken), there are 12 layers in total,
Tenjou has 2 layers, and there is 1 (useless) sand layer.
(nagura.t.mepage.jp/togiya)

From shallowest to deepest:

Mejiro 目白 normally is always been considered as a midrange Mikawa Shiro Nagura,
being finer than Botan ボタン, about equal as Tenjou 天上,  and coarser than Koma コマ.

This doesn’t always seem to be the case…

In this video of Alex Gilmore Mr. Sakamoto shows how
he hones a kamisori razor with a Mejiro shiro nagura: 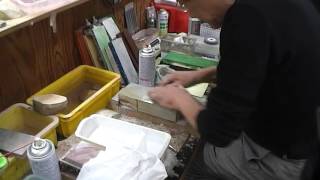 On March 19th (2019) when Florin went to
Mr. Sakamoto, Florin recorded a honing video as well: 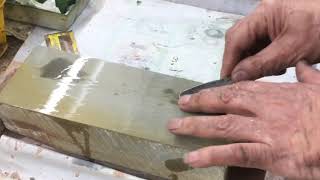 Here is the dialogue between Mr. Sakamoto and Florin:

-What is that? Koma nagura?
He answered:
– No, its Mejiro.
– Why not using koma?
– Because Mejiro is  finer than koma!
– But I knew that koma is finer than Mejiro?!?
– Mejiro is finer, but it doesn’t have cutting power like koma.
– But Koma is more expensive than Mejiro!
– Because it is more rare.

So, there we are!
I’ve tested it myself. At the moment, for me, it is not always clear
if my 特級 (Tokkyu) grade Mejiro 目白 is a bit less fine or finer
than my 特級 Koma コマ, though my 別上 (Betsu Jou) grade Koma
is absolutely finer than my 別上 Mejiro.
I’ve been told of experiences where the HHT results after a
特級 Mejiro vs 別上 Koma were the same! The edge under the
microscope looked better after Koma though. The Mejiro edge
had a more “toothy” appearance.
What seems to be clear is that Mejiro 目白
is absolutely finer than Tenjou 天上!
Please share your own experiences trough this poll!
Poll:
Is Mejiro finer than Koma? (polls)

(When the Poll isn’t visible, for example on the browser “Brave”, please deactivate the shields, thank you!)

Mr. Sakamoto recommends
to leave the nagura in water for 5-10 minutes before use.
This way it will get softer and it will be easier to make slurry.
It also avoids the nagura making scratches on the base stone.
When using just a splash of water and making slurry with a
“dry” nagura, not only the base stone becomes scratched,
also stone particles can loosen at an unpredicted moment,
a nice polished bevel can become nasty scratched
in a blink of an eye, especially on hard stones!
Soaking the nagura
before honing tends to avoid this, 5-10 minutes is fine,
leaving it to soak for a ½ – 1 hour is no problem as well.

After studying in Shizuoka, Nagoya to sharpen (hairdresser?) scissors,

‘Sakamoto Misao’ spread the natural whetstone (Jun Mikawa white Nagura) nationwide, and launched in 1961 a polishing research group with famous people as ‘Kōsuke Iwasaki’ (who was in search for a sharpening stone suitable for a high quality steel steel razor) and others. (1/9 association, Update ’19, Feb).

The exploitation of the Mikawa nagura stones and a coöperation
with ‘Iwasaki Kōsuke’ 岩崎航介, ‘Iwasaki Shigeyoshi’ 岩崎重義 and
‘Nagayuki Asano’  浅野長幸 (a lecturer at a barbershop) began.

“According to the late Kōsuke Iwasaki, when he first started making
razors he had trouble with honing. He was getting breaks and chips
on his edges, which he eventually found came from the inferior
Nagura that were being sold by the merchants–they were cheap,
and easily found, and of substandard quality. So he began searching
for a long lost source for the Nagura that had been used for centuries
in the polishing of Katana…

He took this selection very seriously; in his book “刃物の見方”
(“Understanding Bladed Implements”), he said something along the
lines of: “If a razor maker can not hone a razor well, the razor will
not shave well, and people will think that the razor is no good.”

So he worked on researching just where the best hones, and the best
nagura to use with them, could be found.

The Junmikawashiro mine (純三河白 …) in Aichi prefecture is the only
place in Japan that produced the Nagura that Iwasaki-san found suitable
for the finest honing and polishing. Not only that, he identified the different
seams of the mine, and with the help of geologist Nagayuki Asano divided
them based on their polishing effects, speed, and purity.”

‘Iwasaki Kōsuke’ and ‘Nagayuki Asano’ developed a quality-control system for
grading and authenticating Mikawa Nagura. Each piece was carefully inspected,
and subsequently ink-stamped to qualify the layer and quality of each stone.

‘Sakamoto Morio’ 坂本守男 (°1939) inherited the Asano stamps from
his father, ‘Sakamoto Misao’, and he continues to qualify each piece
of Nagura today (純三河名倉).

Presently (March 2019), ‘Sakamoto Morio’ is 79 years old
(will be 80 this year in October) and still working in his
store in Toyohashi, but relatively soon the Asano stamps
will be passed to his son ‘Sakamoto Kouji’.

The mine was closed in 1976, all ‘new’ Nagura are cut from
large pieces of stock that was mined and stored before then.

The access to Mikawa mine was very difficult, from the road to the
mine entrance is a long and steep way. Because of this they could
make only 3 trips/day to carry the stones from mine to car.
Also, from the mine entrance to the place where the nagura
were found is a 200m long tunnel of approx. 80x80cm tall/wide!

It is not clear what the meaning is of 白名倉 (Shiro Nagura),
especially because it stands together on the stone with こま (Koma).

So it doesn’t have an association with 目白 (Mejiro).
It does remind me at a rare Iwasaki nagura:
Mikawa Shiro Nagura:

岩崎選 = Iwasaki-sen = Iwasaki Selection
白名倉 = Shiro nagura = White nagura
Perhaps they were mined and stamped before the 1960’s,
where maybe 白名倉 became 純三河白名倉??? (not sure!)
Or, maybe they were mined in Tozawa (Aichi prefecture, Minamishitara
district, Hōrai city), which, as previously mentioned, is nearby Miwa village,
where 純三河白名倉砥 were mined. The stones, mined in Tozawa, were called
三河白, Mikawa Shiro (Mikawa white), a white, compact, tuff stone, used for polishing/finishing…
Again, I’m not sure if these are such stones…

Talking about Iwasaki, here is a stone with both Iwasaki and Maruka (Hatanaka) marks:

郡上砥
= Gujō to, a less known stone which can be used as a nagura (名倉)

Gujo Nagura originally is said to be used for finishing (with mirror finish),
although not as famous as the Mikawa nagura.

This entry was posted in HISTORY & IDENTIFICATION. Bookmark the permalink.

This site uses Akismet to reduce spam. Learn how your comment data is processed.